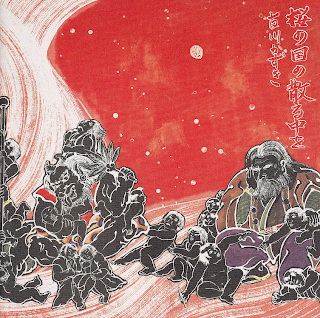 While I still can't quite figure out the title to Kazuki Tomokawa (友川かずき)'s fifth studio album, 'Sakura no kuni no chiru naka o' (桜の国の散る中を) must mean something like 'Within the Country of Falling Cherry Blossoms'. Wouldn't 桜の散る国の中を make more sense though? Just goes to show how hard it is (for me at least?) to get a good grip on this devilish language. So anyone with more insight, please help an otōto out.
Anyway, this album was released in October 1980 on Bellwood, and reissued in 1992 and again in 1995 on King. The studio album that preceded this one was 1978's 俺の裡で鳴り止まない詩 ('Ore no uchi de nariyamanai mono'), which was posted here earlier; but in the meantime Tomokawa had released his first live album, 犬～友川かずき秋田コンサートライブ ('Inu - Tomokawa Kazuki Akita Konsāto Raibu', or in translation: 'Dog - Tomokawa Kazuki Akita Concert Live'), which I may get around to some other time (it's essential if only for that exclusive song 寂滅 ('Jakumetsu', which means 'Nirvana')).

The tracklist on this one is as follows (Japanese / rōmaji / translation); the translations are the ones given on the official website.

The last one, the epic title track (dig that choir!), is subtitled （会田哲士君の霊に捧ぐ）in the booklet: 'Aida Tetsushi-kun no rei ni sasagu', 'Dedicated to the Soul of Mr. Tetsushi Aida'. I don't know who this is, but the 'kun'-suffix would seem to indicate that it's a younger friend of Tomokawa's.
There does not seem to be any link between the Odo in the spoken sixth track and the eponymous killer from Kan Mikami (三上寛)'s song on his first album, 三上寛の世界 ('Mikami Kan no sekai', 1971). 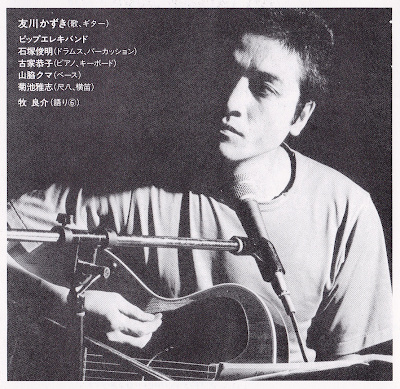 In the booklet (scans included), we find the following credits:
友川かずき (Kazuki Tomokawa): singing, guitar
ピップエレキバンド (Pippu Ereki Bando = Pip Electric Band; as far as I can recall the only other album this band is mentioned on is 'Inu'):
石塚俊明 (Toshiaki Ishizuka, yes, the guy from Vajra): drums, percussion
古家恭子 (Kyōko Furuya, who was already there from the first album): piano, keyboard
山脇クマ (Kuma Yamawaki): bass
菊池雅志 (Masashi Kikuchi): shakuhachi, yokobue (two types of Japanese flutes)
牧良介 (Ryōsuke Maki): narration on track 6
There are a bunch of other musicians in minor roles, but let's not go crazy.
By the way, last year's live DVD has been reuploaded here.
Just listen.
320kbps.

When You're Done Here, Check:

The purpose of this blog is to give some obscure, under-appreciated music more exposure. I fully support all the artists featured and encourage everyone to do the same. It is my sincere hope that this music appears on more people's radars. Posts are limited to albums that are either out of print or that seem to have remained unnoticed by all but a handful of fanatics. Support variety, buy eclectically, spend generously.
No music is hosted on this site, there are only links to external files. If you take offense to anything posted here, let me know and we'll work it out.